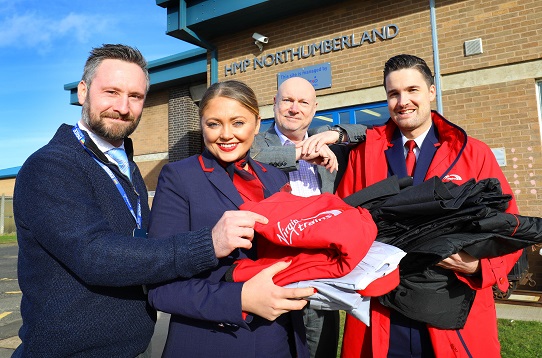 HMP Northumberland and Virgin Trains have teamed up to transform old uniforms in a pioneering recycling scheme.

When Virgin Trains launched its new body-neutral uniform range late last year, a top priority was to pursue a zero waste to landfill initiative for 30 million tonnes of old uniforms. Fittingly, our team at HMP Northumberland was in a prime position to help give them a new lease of life.

HMP Northumberland prisoners working in the onsite textile factory are transforming them into warm sleeping bags, clothes and blankets for the homeless.

On receiving the old uniforms, Steven Goodacre, head of business development at HMP Northumberland, said: "This is a fantastic opportunity for our offenders to learn new skills which will help them once they have been released, while also decreasing the likelihood of reoffending. It is great to be giving back to local and national homeless charities through this scheme. We’re delighted to be partnering with Virgin Trains on this uniform upcycling initiative."

The project has received extensive media coverage both in print and online, potentially reaching over 10 million readers, including articles in The Big Issue magazine, the Northern Echo and Recycling & Waste World.